Risk market inflows up 3.7 per cent over the past year

Total risk market inflows have risen 3.7 per cent over the past year from $17.1 billion to $17.7 billion according to research Plan for Life.

Annual risk sales dropped 16.9 per cent due solely to group risk sales more than halving, down by 52.1 per cent. Meanwhile reported individual risk income sales rose 10.4 per cent but those of risk lump sum finished slightly lower, down 1.8 per cent. 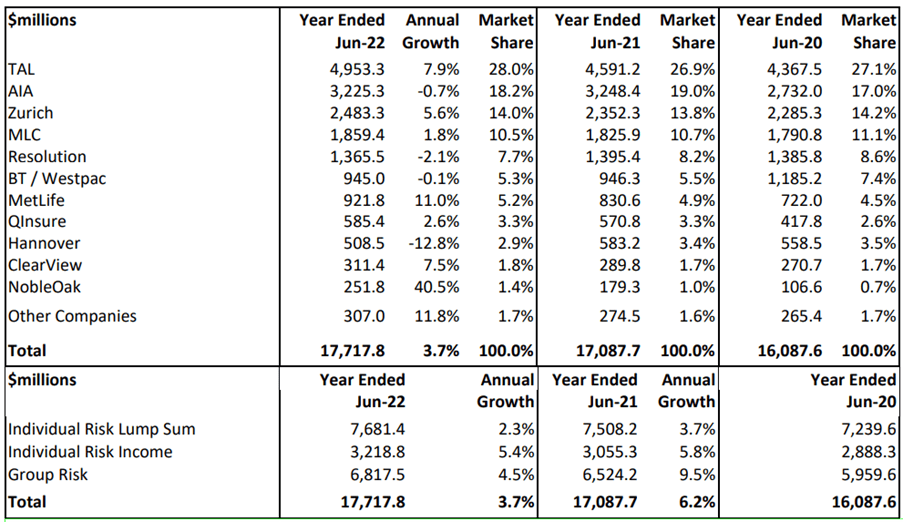 All tables sourced from Plan for Life.

Risk income inflows continue to grow significantly faster than the lump sum market, up 5.4 per cent over the past year. Among the better performers in percentage growth terms were NobleOak (44.2 per cent), Zurich (10.3 per cent), ClearView (8.3 per cent) and BT/Westpac (6.8 per cent).

Inflows into the lump sum sub-market posted stable growth of 2.3 per cent over the past year with mixed results amongst leading companies, with NobleOak (37.8 per cent), ClearView (7.0 per cent), Zurich (6.6 per cent) and TAL (2.4 per cent) posting positive growth, while BT/Westpac (-3.2 per cent), AIA (-1.4 per cent) and MLC (-0.6 per cent) reported falls. Integrity Life also reported significant growth although off a much smaller base.

Overall group risk premium inflows experienced a 4.5 per cent increase over the past year, with the two largest companies, TAL and AIA reporting growth rates of 12.5 per cent and -0.4 per cent respectively, although the researcher noted individual company growth can be significantly impacted by super fund insurance mandate movements.