When the unknown person (or persons) who went by the name Satoshi Nakamoto invented Bitcoin 13 years ago, they probably didn’t have helping New Jersey’s Holocaust survivors on their mind.

“What is needed is an electronic payment system based on cryptographic proof instead of trust, allowing any two willing parties to transact directly with each other without the need for a trusted third party,” Nakamoto wrote.

The payments system relied on keeping track of ownership in a database distributed on computers around the world — the “blockchain.” Initial ownership of shares of the currency —the Bitcoins — were given to people who set their computers — or their fancy computer graphic cards — to work performing complicated yet fundamentally pointless calculations. As of this week, the value of ownership of shares in this payment system totaled more than $1 trillion — a lot of gelt for shares of something that, unlike a stock, doesn’t represent a piece of an actual business enterprise with a promise or hope of future revenue. But as cybercurrency advocates happily point out, since 1971 the value of the U.S. dollar has reflected not an underlying quantity of gold but rather a communal belief in its value.

Bitcoin is just one of a mind-numbing number of similar computer-based currencies.

And now, because Bitcoin and its fellows have grown in profile, value, and, you should pardon the expression, currency, you can transfer your ownership of digital bits into real good deeds.

More specifically, you now can donate cybercurrency to the Jewish Federation of Northern New Jersey, which will immediately exchange it for dollars and then use those dollars to provide such services as meals for Holocaust survivors.

“We’re meeting donors where they are,” Jason Shames, the federation’s CEO, said.

On the federation’s website, JFNNJ.org, “Donate Cryptocurrency” tops the menu of “Other Ways to Give,” ahead of the longer-standing “Donate Stock” and “IRA Distribution.”

Clicking that link will take you to a form that will let you choose from a donation amount denominated in Bitcoin, Ethereum — a rising cybercurrency with about a quarter of the overall value of Bitcoin — or more than a hundred other cryptocoins. The form will calculate the dollar value of the selected cybercurrency. (At this writing, for example, a donation of a quarter of an Etherium token is valued at just above $1,100.) Enter your name and address — or follow the principle of anonymity favored both by cryptocurrency advocates, who see it as digital cash, and by Maimonides, who advised giving charity anonymously as the virtuous path — and the screen will then show a QR bar code that you can scan. That allows you to painlessly transfer the funds from your cyberwallet to the federation’s.

All of this is through arranged through the Giving Block, a company founded in 2018 to facilitate the donation of cryptocurrency to nonprofits. The Giving Block takes care of the technology on the federation’s website; it also automatically converts the donated cryptocurrency into dollars. 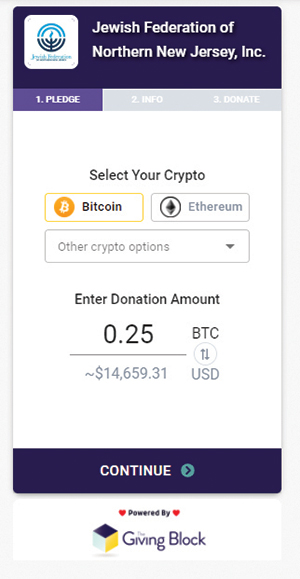 According to the Giving Blocks’ website, about 35 million people now use cryptocurrency in the United States; and nearly 200 million more around the world do so as well.

“Over the past 18 months, cryptocurrency has exploded in both the breadth of people owning it and the prices,” Mr. Shlufman said. “Depending on when you bought it, your gains are from three to 100 times what you paid.”

So he asked Robin Rochlin, the managing director of the federation’s endowment foundation, if he could donate some Etherium coins. Her initial “no” turned into an “let me look into that,” which a couple weeks later became the “Donate Cryptocurrency” link on the website.

The Jewish Federation of Northern New Jersey was only the third Jewish federation to accept cryptocurrency, following San Francisco and San Diego —  both notably closer to Silicon Valley.

For Mr. Shlufman, the case for donating cryptocurrency to the federation is clear. “It’s not painful to make a donation that is a large gain in a short time,” he said. “You can take this cryptocurrency, which is at its highest levels, give the appreciation to the federation, get a tax deduction, and avoid the volatility.” All while helping people in need in North Jersey and around the world.

He said he envisions two types of donors who will take advantage of this new giving opportunity.

“One is younger donors. A lot have put a few hundred or a few thousand dollars into Robinhood” — an investment app that offers cybercurrency as well as traditional stocks — “and now have an incredible amount of money in it. This is a good way for them to make a donation to Federation, maybe even a first-time gift.”

He has heard about a 21-year-old who bought $4,000 worth of Etherium; it’s now worth $350,000. “For someone like that to make a donation  of $1,000 or $5,000 might be enticing and is not that painful,” Mr. Shlufman said. (Unfortunately for the federation, that young and now-rich acquaintance is not Jewish, so Mr. Shlufman won’t be soliciting a cyberdonation from him.)

But Mr. Shlufman said he expects there will be older donors as well, who may have “bought Bitcoin as part of their aggressive investment portfolio a year or two ago. They may be sitting on an incredible amount of Bitcoin and may want to scrape some of that off and make their gift.”

Overall, the Giving Block says it expects to process more than $100 million in cryptocurrency donations this year.  How much of that will be processed on behalf of the Jewish Federation is at this point anyone’s guess.

“Ten years ago, who would have known an unknown, unvalued, un-understandable asset could actually feed people?” Mr. Shames said. “It’s kind of remarkable, but why the heck not?”