Dogecoin is still a strong contender for the attention of cryptocurrency investors who are chasing assets with the most potential. Larger assets and market leaders such as Bitcoin and Ethereum have often provided this for investors with large profit margins, but with the crypto winter, Dogecoin has seen more upside compared to its larger counterparts.

Majority Of DOGE Holders In Profit

A bear market is a time when a lot of digital assets plunge in price and their profitability can hit new lows. For bitcoin and Ethereum, it has been a rollercoaster year where it fluctuates between the majority being in profit or loss. This time around, both cryptocurrencies are seeing a large part of their holder base being in losses but the same is not the case for Dogecoin.

When Elon Musk had taken over Twitter, it had been a trigger the price of DOGE. The meme coin had rallied more than 100% in a matter of days, peaking at $0.15. Presently, it has lost a good portion of those gains but at $0.08, DOGE holders are having a better time compared to investors in other large cryptocurrencies.

Data from IntoTheBlock shows that while bitcoin and Ethereum investors are seeing less than half of their holders in losses, 57% of all DOGE holders are in profit. It goes heavily against the current trend of losses where even DOGE’s biggest competitor SHIB is seeing only 17% of its holders in profit at current price levels. 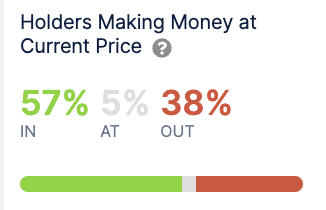 The meme coin also boasts a large base of long-term holders with 69% of all investors have held their tokens for more than one year. Sentiments around Dogecoin are also quite bullish compared to the rest of the market due to these factors.

For now, even though Dogecoin is doing quite well, there are still speculations on where the price might still go from here. A $0.1 price point is not far-fetched for the digital asset. However, there are still negative pressures on DOGE at this time due to the uncertainties that currently circle Twitter.

Nevertheless, DOGE continues to maintain above its 100-day moving average. This shows strong buy signals for the digital asset even at current prices. The next resistance level for Dogecoin currently lies at the $0.9 level and if the buying continues, then DOGE could easily test these levels.

There is also good support for DOGE at the $0.08 level which would come in handy if the bears were to try to retake control. Dogecoin’s ability to maintain such high profitability even through uncertain times lends credence to what billionaire Elon Musk said about the meme coin is one of the cryptocurrencies with a good future.